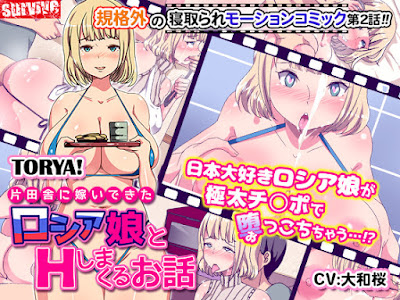 * Story *
It was a hot summer.
Out of work, the protagonist visited his family's house in the countryside.
His ambitions were in tatters. He forewent a job hunt in favor of lazing around the house.
That's how he got close with his brother's wife.
Her name was Arisa.
She was a stunningly beautiful Russian bride transplanted to Japan.
Her interest in Japanese was strong, and she was refreshingly open and tender.
It wasn't long before the bitter protagonist fantasized about stealing her.
Around the same time, his brother went on a trip.
The night before his brother left, he overheard that Arisa and his brother were in a basically sexless marriage.
What could be more perfect?
The protagonist had his brother beat in two departments: virility and perversion.
More than just making Arisa his own... could he get her to fall in love with him?